THE PICTURE ABOVE IS THE THREE WISE MEN PRESENTING GIFTS TO HORUS THE YOUNG CARVED IN STONE.

The bird head man is Thoth the wisest man of them all according to the Egyptians. The third wise man is sitting down with Horus in his lap.

The story has been carried by mouth and tradition this whole time. It still continues with other lies spread by mouth today.

Thanks for coming to my website as you can see I’m not messing around with the truth here. I have been studying all the different aspects of religion for over 2 decades now.

I have went over Thomas Paine’s book The Age of Reason twice slowly bit by bit to make sure I understood all of it. The Age of Reason breaks down both the old and new testaments pointing out the many many contradictions.

Also I’ve listened to Hitchens and Dawkins documentaries. They concluded the same things and I agree after much thought and research but no one will bring it all together or criticize the most important parts until now.

Remember I’m just the messenger all this info has been out there. Now you can find it all in one place with a bit more insight. I’m just trying to help the world find the age of reason and to help bring real peace.

Make sure to check out the real truth evidence pictures in the gallery. Please check it a second time after you finish reading the site the pictures take on a whole new meaning.

The image below is a snap shot from Egyptian myths showing the end time story. The main part of the Christians end times heaven on earth coming back to live happily ever after with your family all plagiarized from the Egyptians. The Christians call it the rapture even though the word rapture isn’t even in the Bible which makes it a con mans trigger word passed by mouth.

I read a news report where they interviewed people that believed fully in the rapture. Many admitted to waking up not finding their family then flipping out thinking they went up to heaven in the rapture and they did something wrong. They thought they would never see their loved ones again but really their family went to the store real quick to come home to find their child losing their mind it’s religion for you. The victims of this trauma report PTSD, sadness, depression and anxiety. Many admitted to leaving the religion over it the trauma was so bad. 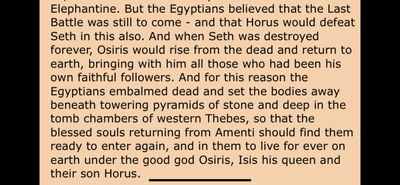